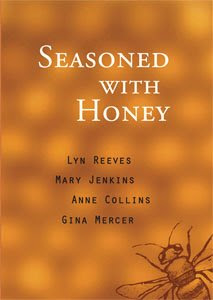 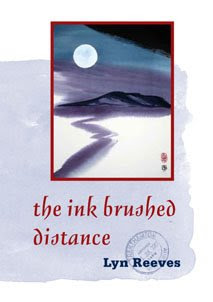 The following two new books are being launched at Hobart Bookshop
on Thursday 8th May, 5.30 pm:

* Seasoned with Honey, an anthology of poetry by four Hobart women, Anne Collins, Mary Jenkins,
Gina Mercer and Lyn Reeves. This collection, in manuscript form, was awarded first prize in the National FAW Victoria Awards for an anthology by a writing group in 2006.

The collection, published by Ralph Wessman of Walleah Press / Famous Reporter fame, will be launched by Pete Hay.


* The ink brushed distance, by Lyn Reeves, will be launched by Karen Knight.
This chapbook is also published by Walleah Press.
By Anne Kellas - April 26, 2008 No comments: Links to this post

When Jane asked me if I would launch this wonderful little book, I felt that I owed her one. I was feeling guilty for having knocked back her request that Cornford Press publish her Crying in Public Places in 2004. This decision had nothing to do with the quality of the poems, which were excellent, but it was merely an unfortunate matter of timing, as I had made the decision not to publish any more books, just before her request arrived. Had I kept going for another year, there is no doubt that Jane’s would have been one of those collections chosen. I had not been aware of her first book, which won the Anne Elder award for a first volume, and so the manuscript of Crying in Public Places came out of the blue, as it were. I was very impressed with it, certainly more than I have been with any other manuscript submitted to Cornford Press by a writer whose work I had not been familiar with. Of course, having met Jane, having heard her read at the Tasmanian Poetry Festival, and being therefore sufficiently aware of her work to keep an eye open for her name in journals, I soon remedied my ignorance.

So it is certainly not out of a sense of guilt alone that I am here before you, but primarily because I have become even more of a fan of Jane’s poetry each time I encounter some. Hers is an important voice, a voice which chronicles, explores and celebrates the world we live in not only by what it says but more significantly by how it says it. She has a wonderful capacity for catching the precise, telling detail and presenting it in the perfect nuance of tone. Examples of this facility abound in Begging the Question, but here are a few: from “Some Towns”:

and then there’s the “lolly pink backpack” in “Groupie”, the “red lace curtains” in “Deviations on Home” and lots more.

Actually, the title of that last poem also tells us a great deal about Jane’s approach to poetry. Most writers would have been content to call the piece “Variations on Home”, but Jane squeezes the language just that bit further to get the tastier juice out of it. At times she does this in a playful mood, as when she says that the right poem can “bring a dogma to heel”, or when in “Churches of the Developed World” she refers to “salivation” in a context in which we might be expecting “salvation”. At other times the felicitous choice of words reinforces the emotional strength of an image, as, for example, when the young couple in the bottle shop (in “Days of Hope”) converse in “silver-lined whispers”.

If I could, without sounding too pompous, make a general observation on the state of poetry in Australia today, there are far too many “good” poems. What I mean is that too many poems are written within the acceptable boundaries of what poems are supposed to be like. There is an insidious and politely ignored suffocation implicit in this phenomenon. Whilst I am not advocating complete anarchy, I scan the pages of anthologies and journals, often in vain, for those poems which break out of the constraints of what I would call “meritorious mediocrity”.

Jane Williams’s poems do break out, and for this we should all be grateful. They break out, first of all, from the confines of the ego. This is one of the most life-threatening forces working against contemporary poetry. If I read another poem which concerns itself primarily with the poet’s feelings, I’ll track down the perpetrator and inflict some sort of appropriate punishment. That is not to say, of course, that there is no place for the presence of the poet in the poem. Jane is very strongly a presence in her poems and they are the more interesting for that. She is, however, their cause without being their reason. These poems are always reaching out: out to other strongly delineated individuals, to friends and family, to history, to the physical and social worlds she inhabits.

They also break out, as I indicated before, from the confines imposed by safe, politely understated diction. Her tone, while always spot-on, is variously modulated. This allows her to go beyond the sort of writing where (to quote a line from “The Land of Just Right”) “nothing is too big small hot cold high or low.” Because she has the ability to pitch her language so accurately (in other words, she writes with her ear — by far the most important organ for a poet) she can tackle the poetic presentation of a variety of situations, characters, events and settings. So these poems also break out from the constraints imposed by what sometimes appears to me to be a consensus, even a conspiracy, as to what constitutes proper raw material for poetry.

To say that this book is published by Ginninderra Press means not having to spell out that it is stylishly designed and handsomely presented. I congratulate Ginninderra for having the sense and good judgement to go where I was unable to go four years ago, and, more importantly, I congratulate Jane Williams on a remarkable collection which I am pleased to launch and to commend to you wholeheartedly.

Email ThisBlogThis!Share to TwitterShare to FacebookShare to Pinterest
Labels: prizes and awards
THE LEE MARVIN READINGS 2008!

9 Anster St, Adelaide, SA
(off Waymouth at the King William end, near FAD nightclub)
7.30 for a prompt 8 PM start
Price $5

Email ThisBlogThis!Share to TwitterShare to FacebookShare to Pinterest
Labels: readings

The Minister for Education has today announced that the Rudd Government will fund a new Chair in Australian Literature to be established at the University of Western Australia (UWA).

The Australian Government will provide $1.5 million towards the initiative which will re-invigorate the study of Australian literature at university, in our schools and throughout the community.

Though a number of universities submitted impressive proposals, the six member selection panel unanimously found the University of Western Australia to be the strongest candidate.

UWA’s proposed strategies to promote Australian literature both nationally and internationally as well as the support of the Western Australian Government were identified as strengths in the application.

As the University’s application noted, UWA has pioneered and remained constantly committed to the teaching and research of Australian literacy studies and is today at the forefront in this field.

The University of Western Australia is to be congratulated on its achievement.

The University of Western Australia has been recognised for its long-standing commitment to the promotion of literature and culture in the community.

The decision follows a competitive process which was open to all Australian universities.

Funding has been drawn from the Diversity and Structural Adjustment Fund which is aimed at promoting diversification of the higher education sector.
Media Contact:

Alan Wearne is launching his The Australian Popular Songbook (poetry) in The Gong and Sydney:

Short story competitions to enter in 2019

Thanks to the Australian Writers Centre, here's a list of s hort story competitions to enter in 2019: https://www.writerscentre.com.au/...